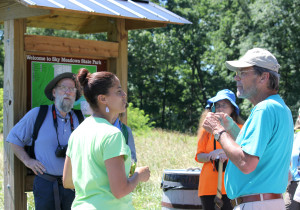 After leaving Shenandoah River State Park early Saturday morning, we journeyed to Sky Meadows State Park, with Shannon (our state parks representative) leading the way. The journey between destinations was brief, lasting only about 45 minutes, so we still had much of the morning to shoot. We were able to get footage of mountain bikers racing through a small creek, equestrians riding through a wooded trail, as well as several pairs of hikers. 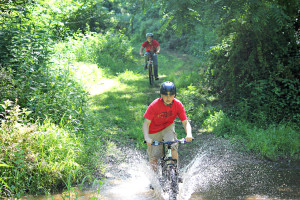 We were in for a surprise when we started shooting a couple fishing at the park’s fishing pond; one fisherman reeled in a big one as if on cue! 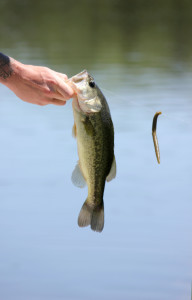 After breaking for lunch, we rode over to the park’s historic area, centered around the Mount Bleak House, a gorgeous farmhouse from the 1860s. Bill shot footage of the children’s cooking class that was held that day, and several members of the film crew enjoyed the apple crisp that was produced in the class. A group of costumed re-enactors played lawn games for us and a group of interested tourists.  Bill got up close and personal (well, not too close!) with the beekeepers and hives as he shot footage of the honey-producing creatures. We all toured the house, which was full of real artifacts from the 1800s. 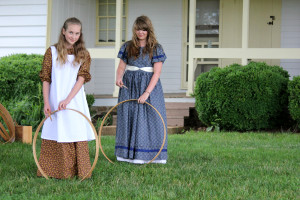 We were also granted permission to drive some of the walking trails in order to capture a family camping in a primitive setting as well as to capture what was, evidently, the park’s most breathtaking vista. Bill drove up the steep hill with much gusto, while the rest of us crossed our fingers in hopes that we’d make it up safely. Once we made it up to the top, we were glad we’d taken the chance, though. The vista provided us with a bird’s eye view of the entire park, with the Blue Ridge Mountains in the distance. The clear blue sky made all of the difference in the world, and even after we’d wrapped up shooting, we stood up there just taking it all in. It was truly nature at its finest! 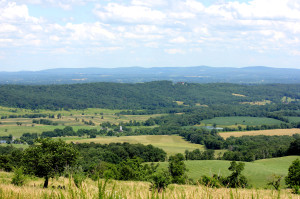 To see a photo gallery of images that I took while visiting Sky Meadows State Park, click here.